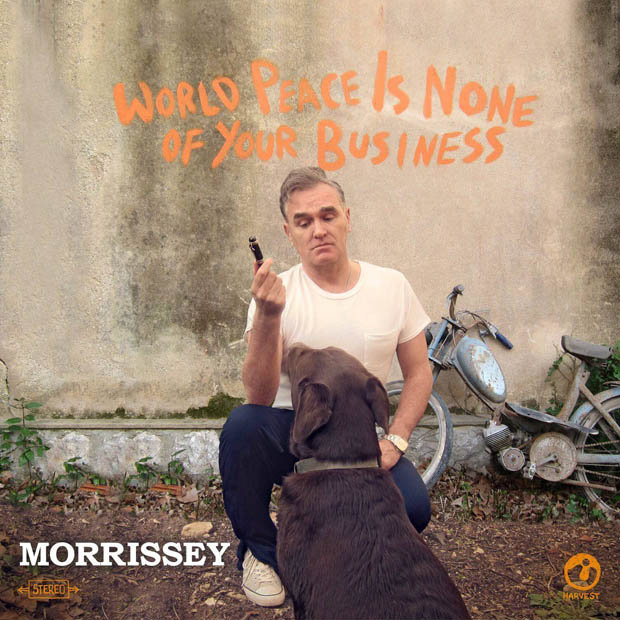 Morrissey is to release his new album World Peace Is None Of Your Business, the new record will be out in July. This will be Morrissey’s tenth studio album and his first release in five years.

The twelve track LP was recorded in France, and was produced by Joe Chiccarelli (the White Stripes, and the Strokes). The iTunes deluxe edition of the album features six additional tracks.

The first single of the record will be, ‘World Peace Is None Of Your Business‘. The video for the track is a spoken word version of the song, and it features Nancy Sinatra. Check it out below.

Speaking to radio.com about the making of the album and working with Morrissey, Chiccarelli says:

“He has a vision, i didn’t know he would be so actively involved in every aspect of the process. I mean every aspect, down to the mixes. Even if he wasn’t in the studio, he’d send me a note: like, ‘At two minutes and thirty-two seconds, please bring up the guitar on the right, it’s not cutting enough.’ Or, ‘In the bridge, my voice needs a different treatment.’ His sensibility and style might be more akin to an old-school crooner, and we think of those people as artists who work with an arranger or a producer: they’d go into the studio, do their vocals and then they’re done. That’s not how he is, he’s very involved.”

World Peace Is None Of Your Business Track Listing:

Stevie Nicks Pays Tribute to the Late Taylor Hawkins: “When He...