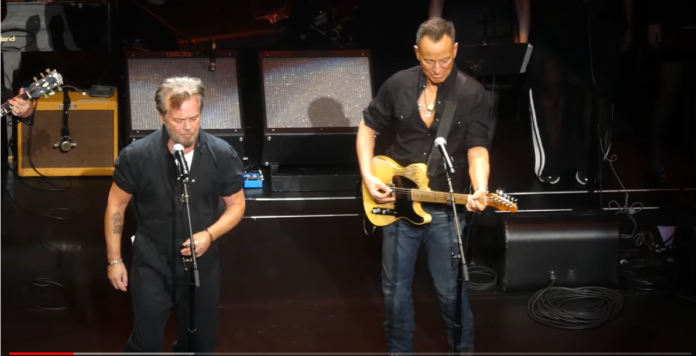 John Mellencamp’s upcoming LP will feature “The Boss” Bruce Springsteen. The album is expected to be released later this year and it is the first time that the pair will work on new material together having been long term friends.

Rumours began circulating online that a collaboration was on the cards, after Springsteen and Mellencamp were seen at a restaurant in Bloomington, Indiana in April.

At the time, a fan tweeted, “A friend just texted me that her son who works in a restaurant in Bloomington texted her and said Bruce Springsteen and John Mellencamp just walked in, and all I can think is ain’t that America”.

They also hailed Springsteen as a “generous tipper”.

Mellencamp may not have elaborated on a new LP, but he did tease fans by singing a 60 second long sample of a track called “I always Lie To Strangers”.

At the time, a statement on Mellencamp’s website had also stated that he had already “cut 10 tracks” and planned on recording 17 more. No official release date has been announced yet, but they said that an album was “due out later this year”.

Back in December 2019, Springsteen and Mellencamp joined forces for Sting and Trudie Styler’s all-star concert, benefitting the Rainforest Fund. This event took place at Manhattan’s Beacon Theatre. Check that out below.

Bruce will be “Playing guitar” – Mellencamp

Now, Mellencamp has confirmed that Springsteen will feature on ths upcoming LP.

“Bruce is singing on the new record and is playing guitar”, he said on Clive Davis’ Grammy Gala. “I finished the record a week ago today”, he also added.

“Springsteen’s music provides a soundtrack of resilience, strength, heart, and joy despite or even in spite of the struggles thrown our way. Drawing from his experiences growing up in New Jersey, Springsteen’s songs have connected on a universal level with fans worldwide”, the Woody website said.

Springsteen himself said he was “honoured” to receive such an award.

“Woody wrote some of the greatest songs about America’s struggle to live up its ideals in convincing fashion. He is one of my most important influences and inspirations”, he said. More on that report here.

Keith Richards Says “New Music Is On The Way”