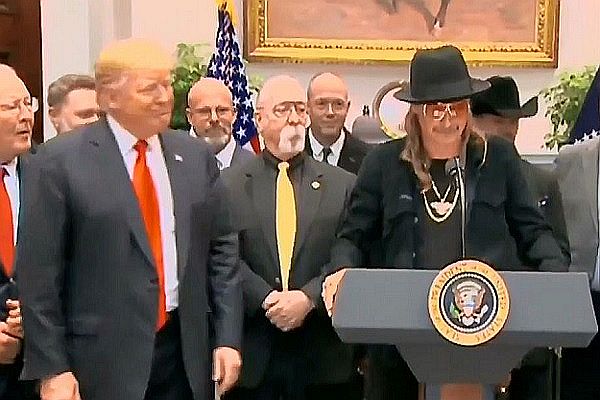 Donald Trump signed the much anticipated Music Modernization Act into law at the White House on Thursday.

According to Rolling Stone, it’s the most high-profile legislation for the music industry for many years. Mike Love (pictured below) and Kid Rock, are two of Trump’s most dedicated supporters in music and they were at the White House for the signing. Also in attendance were Sam Moore of Sam & Dave, country singer John Rich and the Doobie Brothers’ Jeff “Skunk” Baxter.

The law seeks to revise music copyright law for the digital era, H.R. 1551 ( “Orrin G. Hatch-Bob Goodlatte Music Modernization Act”) will make three key changes. It will ensure songwriters and artists are granted royalties on songs recorded before 1972. It will provide royalties for music producers; and will modernise licensing and royalty rules for streaming services. It will also pay rights-holders in a more streamlined fashion, facilitated by an independent entity.

Under the act, a majority of music creators will have a more reliable way of collecting the money that they’re due.
Trump asked Kid Rock, “You like this legislation or do you hate it?” and Rock said, “I like it.”

“Everybody knows this business of music is a very dirty business,” Rock said following the signing. “There’s a lot more that needs to be done here. We need to go after the record labels next, and things like free goods. But this is a great start to protect songwriters, producers, engineers — the unsung heroes behind many of these songs that go out there. People like myself who are maybe more at the top of the food chain, it really doesn’t affect as much. But I know many people it does affect.”

Kanye West met with Trump at the White House on Thursday but did not appear at the signing. The president gave prepared comments citing the MMA a milestone that would “close loopholes” in copyright law and assist music creators to get paid. “They were treated very unfairly. They’re not going to be treated unfairly anymore,” said Trump.

Music business leaders reacted to the signing with enthusiasm. Spotify’s general counsel and vice president of business and legal affairs Horacio Gutierrez, said, “One of our core missions at Spotify is to enable a million artists to make a good living from what they love: creating and performing music. The Music Modernization Act is a huge step towards making that a reality, modernizing the outdated licensing system to suit the digital world we live in. The MMA will benefit the music community and create a more transparent and streamlined approach to music licensing and payment for artists.”

Neil Portnow, president and CEO of the Recording Academy, offered his thoughts, “With the president’s signature today, the Music Modernization Act is officially the law of the land. To celebrate the harmony and unity that got us here, we applaud the efforts of the thousands of performers, songwriters, and studio professionals who rallied for historic change to ensure all music creators are compensated fairly when their work is used by digital and satellite music services. We thank the members of Congress who championed this issue throughout the past several years to bring music law into the 21st century.”

The National Music Publishers Association President & CEO David Israelite, said, “The Music Modernization Act is finally the law of the land. We are incredibly grateful for the Members of Congress who passed the MMA and the President for signing it. Songwriters have for too long labored without seeing fair rates and receiving all that they deserve, and for the first time in history, the music industry has partnered with the tech industry to fix these systemic problems. As we embark on supporting and helping build the critical structures within the MMA, we are humbled by the extraordinary progress propelled by compromise and the unprecedented political involvement of music creators. Today is about their future and this bill stands as a great statement on what can be done when we work together.”