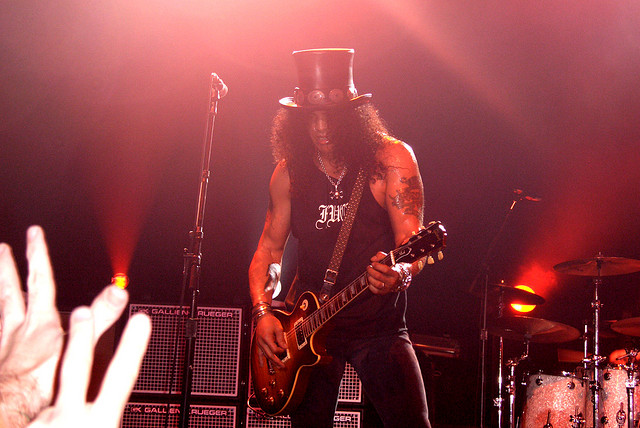 Don’t hold your breath if you’re hoping for a reunion between guitarist Slash and Guns N’ Roses’ frontman Axl Rose.

Slash has dampened down any expectations of reuniting with his former band member saying “I really have a hard time picturing it.”

During his time with GNR, tensions had grown over the years between him and Axl, Slash officially left the band in October 1996.

The frizzy haired guitarist told The Pulse Of Radio, that he never expected to be still talking about Guns N’ Roses years later. “It’s weird because the hype and the, you know, sort of mythic whatever about the band has snowballed to where it’s at at present, and it’s bigger now than it was when the band was still together, which is really sort of, very surreal,” he said.

Back in April, the band’s former bassist Duff McKagan rejoined the group for a tour of South America. However, it doesn’t seem like Slash is that interested in following in McKagan’s footsteps.

In an interview with Guitarworld, Slash quashed any reunion rumours, “People have been speculating about it for years, but I really have a hard time picturing it. There hasn’t been any communication along those lines between he and I. I have a hard time picturing it because I’m always focused on the next show. I’m one of those people who lives in the moment. I don’t look too far into the future and I don’t dwell too much on the past.”

We can also reveal, that Slash’s new solo album World On Fire, will be available to stream exclusively on Radio NOVA, before it’s official released on September 15th.

Slash is currently touring with Aerosmith and will kick off his European tour at the 3Arena in Dublin on November 10th.