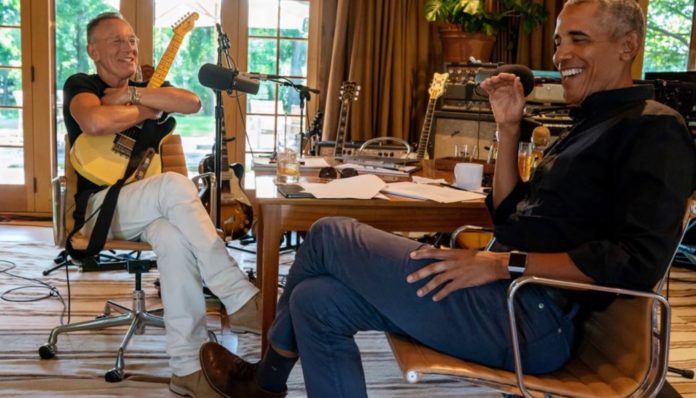 Bruce Springsteen and Barack Obama are to publish a book based on their podcast conversations, it has been confirmed.

Earlier this year, the pair released a podcast series where they spoke about topics including masculinity, racism, and of course music. The podcast was called “Renegades: Born in the USA”.

The podcast also proved to be a major financial coup for Spotify, accruing hundreds of millions of dollars.

Former US President Obama and Springsteen became close friends when they first met on the campaign trail in 2008.

“And one of the friends just happened to be Mr. Bruce Springsteen. On the surface, Bruce and I don’t have a lot in common. But over the years, what we’ve found is that we’ve got a shared sensibility. About work, about family and about America”, Obama said when introducing the podcast’s first episode. Find out what else he said here.

The pair also talked about their early musical influences.

“The first album I bought with my own money (was) ‘Talking Book’, Stevie Wonder. I would sit with a banged-up old turntable – a kind of plastic-y looking turntable – I got myself some earphones so my grandparents would not complain, and I would sing along to every Stevie Wonder song for hours”, Obama had said.

The duo also mentioned artists such as Joni Mitchell, Marvin Gaye and Billy Paul. Read more on this here.

“Renegades: Born in the USA,”

And now, like the podcast of the same name, “Renegades: Born in the USA,” is to be released on October 26.

It will see the duo talk about the state of America and their “enduring love” for it “with all its challeneges and contradictions”.

Yesterday, Obama tweeted, “Since Bruce @springsteen and I first sat down to record our podcast Renegades: Born in the USA, folks have asked about the stories we told and the people and places that shaped us, and we’re excited for this new book to continue the conversation we started last summer”.

According to an extract taken from the book’s opening pages, Obama writes, “Over the years, what we’ve found is that we’ve got a shared sensibility. About work, about family, and about America”.

“In our own ways, Bruce and I have been on parallel journeys trying to understand this country that’s given us both so much”, he added. “Trying to chronicle the stories of its people. Looking for a way to connect our own individual searches for meaning and truth and community with the larger story of America”.

Trailer for Obama and Springsteen’s book

Elsewhere, Bruce Springsteen is to release a film of his 1979 No Nukes Concert. He also said that he hopes to return to touring next year. More on that here.