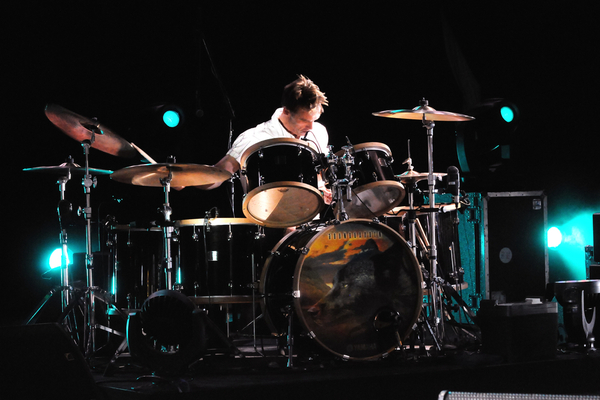 In the absence of drummer Matt Cameron, an 18 year old stepped into the breach as sticksman for Pearl Jam’s gig in Oakland, California over the weekend.

The band have been performing without Cameron, as the drummer tested positive for Covid-19 last week.

Last week also saw Red Hot Chili Peppers Josh Klingoffer deputise in Cameron’s absence for a few songs during a live set last week. This included tracks such as “Elderly Woman Behind The Counter In A Small Town’, ‘Rockin In The Free World’, ‘Why Go’ and ‘Corduroy’.

“Everybody, this is Kai”

Over the weekend, Pearl Jam added their latest recruit to the band to stand in as sticksman while Cameron recovers.

The band introduced Kai Neukermans to the Oakland stage, who helped Pearl Jam perform their 2013 track ‘Mind Your Manners’.

Neukermans had later revealed that upon hearing about Cameron’s absence, he sent a text message to Eddie Vedder’s daughter Olivia. He had met her on a previous occasion.

He was subsequently asked to send a video of himself drumming to a Pearl Jam track. Skipping school to do so, Neukermans was later invited to join the band on stage at Oakland, California. You can check out the footage below.

“Everybody this is Kai; Kai this is everybody!”, Vedder introduced the youngster to the crowd. “You’re leading the band, brother”.

Like many other acts, Pearl Jam also paid special tribute to the late Foo Fighters’ drummer Taylor Hawkins. Hawkins sadly passed away back in March aged 50.

Frontman, Eddie Vedder referred to the special friendship between Matt Cameron and Taylor Hawkins. The duo had performed at a special gig to honour late Soundgarden frontman Chris Cornell in 2019. A year later, they also formed the group Nighttime Boogie.

“We’re all missing him, and so, Matt, I’m sorry again for your loss”, he added. “But it just gives us another chance to say how much we appreciate you as well”.

Eddie Vedder Reveals He Is Still Grieving For Chris Cornell