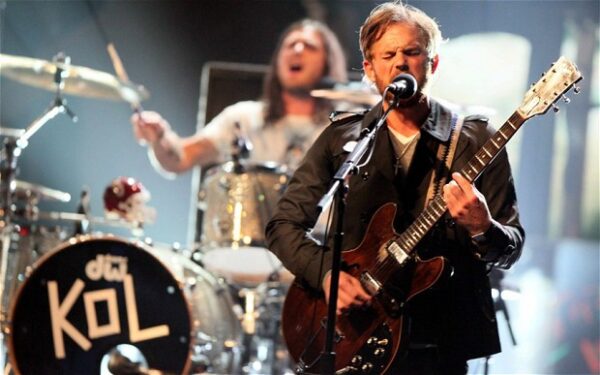 Having just released their latest album “When You See Yourself”, Kings Of Leon also began part one of a two night stand on The Late Show with Steve Colbert by performing “The Bandit”.

This track is included on an album which you might be able to get you hands on. Check this for more details.

The track was performed virtually, with the band congregating on a soundstage to sing the track. You can check out this performance here.

The band also marked the arrival of this new album by launching their new video for another track “Stormy Weather”.

We also brought you the news earlier this week that Kings of Leon became the first band to release a new album in the form of a NFT (Non-Fungible Token).

Read more about that here!

Kings of Leon are “One big happy family”

In a band consisting of three brothers and a cousin, drummer Nathan Followill said that Kings of Leon is still very much “one big happy family”, despite working together for 20 years.

This point was echoed by his brother and frontman Caleb, who added, “We’re all at a point now where we’re happy and we love each other. We make each other better at what we do”.

“Can’t wait for our first festival back”

Not just content with releasing another album, Caleb and Nathan Followill also said that Kings of Leon cannot wait to return to the stage again.

“You can get really nervous and paranoid and overthink stuff, ‘Oh, man, do we still have it? When we finally do get back together, is it going to be an uphill battle?’ Caleb explained.

He continued, “But it really is like riding a bike. We met up last week and we all fell right back into place. And we all just looked at each other and said, ‘I’m ready to get the f**k out of here”.

“I want to go out there and live to the fullest, and really drink it in and enjoy every moment of it this time. And hopefully, we’ll still be saying that 20 years from now” the frontman added.

Nathan had this to say, “I just can’t wait for our first festival back, to look sideways and see all of our kids over there rocking out. That’ll be a good day”.