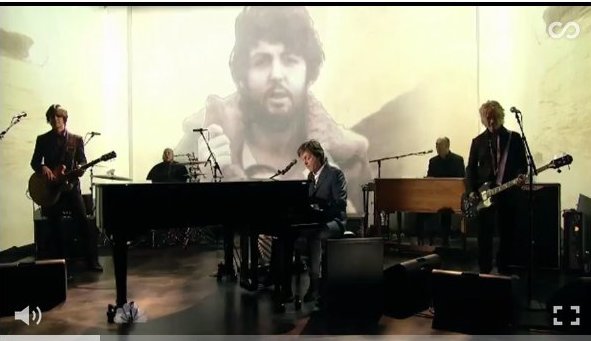 The song appeared on his debut solo album McCartney. It was written about his wife Linda, who helped him through the rocky break-up of the Beatles.

Macca was introduced by another rock legend, the Rolling Stone’s guitarist Keith Richards. Keith quipped: “In the early Sixties a band came out of England and it changed the world But enough about the Rolling Stones: Ladies and gentlemen, Paul McCartney.”

McCartney sitting at a piano, then broke into a heart-felt version of ‘Maybe I’m Amazed’. Watch it below.

Not only did the Liverpudlian play a solo performance, he broke into a duet with Paul Simon, playing Beatles song ‘I’ve Just Seen a Face’, from the 1965 album Help.

Video: Dylan And Young Duet In Ireland For First Time In...

Muse’s Matt Bellamy Says Their New Single is ‘Too Offensive For...