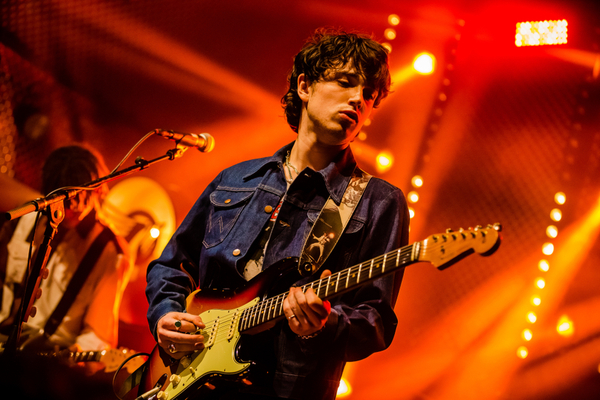 Elijah Hewson has said that being the son of U2 legend Bono has helped to “open a lot of doors” for him. He did admit that he still had to prove himself.

Hewson also appears to be very much following in his father’s footsteps, fronting Irish rock band Inhaler. The band recently celebrated their debut album It Won’t Always Be Like This hitting number one in both Ireland and the UK.

Apple did not fall far from the “Joshua Tree” you might say!!

Reacting to the news, the band took to Twitter on Friday (July 16) to express their delight in the album hitting number one on “home turf”.

“It’s hard to express how grateful we are that our debut record has gone to number one on home turf”, they wrote. “Theres no better feeling than seeing our music resonate with people on this island we love so much. We owe more thanks than we can possibly express to everyone who has supported us”.

It’s hard to express how grateful we are that our debut record has gone to number one on home turf. Theres no better feeling than seeing our music resonate with people on this island we love so much. We owe more thanks than we can possibly express to everyone who has supported us pic.twitter.com/RPFlgR0LJJ

Back in March, Inhaler also confirmed the dates for their tour of the UK and Ireland next year. This will promote that debut album “It Won’t Always Be Like This”. Check out the tour dates and more here.

There’s more! Inhaler also confirmed an intimate album show scheduled for Saturday, 11 December at the Workman’s Club in Dublin. More on that here.

The album is out now on Polydor.

Following this, Inhaler’s frontman Elijah Hewson recently spoke to a PA agency about his legendary father.

“I don’t blame people who are interested in it”, Hewson said. “I would be interested if I heard that some person was in the same position I was in”.

“It has definitely allowed a lot of doors to be opened”, he admitted. “But I think those doors shut just as fast because some people may have pre-biases to the band”.

“But we are OK with that as long as you come to see a show and you buy a T-shirt on the way out”.

“We have definitely found our own fanbase in the UK who maybe don’t know who U2 is or are”.

“Just DNA isn’t it?” – Elijah on suggestions he sounds like his father

Addressing suggestions that he sounds like his father, Elijah Hewson gave this calm response, it is “not much of a surprise because it’s just DNA, isn’t it?”.

Elijah also reiterated that the band’s success is down to their “grafting”, with the pandemic doing little to halt the band’s progress.

“We did all the grafting”, he insisted. “We have done a lot of grafting. You need to do it yourself to build character and make sure that your band can continue”.

“It’s of course really, really handy to be able go to someone like that and ask for advice”, Elijah revealed. “But I think we have all discovered that we need to figure things out on their own”.

“I am sure a lot of people would have expected us just to take the easy route and use connections and stuff, but we haven’t done that”.