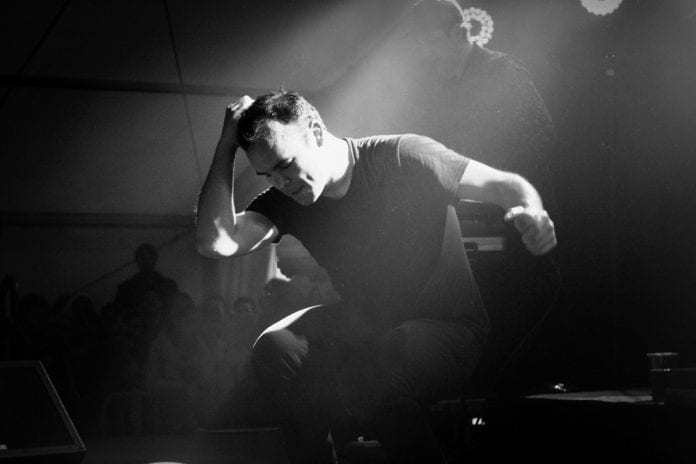 Future Islands will be sampling the Irish summer this year! The Baltimore trio have already been confirmed to play Dublin’s Iveagh Gardens in July and have now been announced for dates in Galway, Limerick & Cork.

The news comes ahead of the release of their new album The Far Field, which drops on April 7th. They began writing it last January and lay down the tracks at Sunset Sound in LA (previously host to The Beach Boys and Prince) with Grammy Award-winning producer John Congleton.

Consisting of 12 tracks, with lyrics written by Samuel T. Herring (vocals, lyrics), William Cashion (bass, guitars) and Gerrit Welmers (keyboards, programming). The much anticipated follow up to Singles will be available on digital, CD, black and white vinyl and cassette, as well as a first-of-its-kind miniature LP.

Described as “ … twelve chest-pounding love songs and odes to the road, Future Islands brilliantly expresses the band’s central themes they’ve been exploring for the last decade: that there is power in emotional vulnerability, that one can find a way to laugh and cry in the same breath – and be stronger for it. “

Islands, who played Glastonbury in 2015, met while studying art at East Carolina University in Greenville North Carolina and their first band was called Art Lord & the Self-Portraits (we prefer Future Islands).

A jam packed year for the guys lays ahead; they will be playing dates in the U.S and Europe before gracing our shores.

Until then here’s a taste of their new material; listen to new single ‘Ran’ here.

And if that’s not enough, here’s a throw back to Sam Herring & Co.’s fearless performance of ‘Seasons (Waiting On You)’ on David Letterman’s late night US TV show.

Tickets on sale Friday 3rd March at 10am from:

Tickets on sale Friday 3rd March at 10am from:

Tickets on sale now from: