Home Music News Video: Foo Fighters Fan Is Crowd-Surfed Up On Stage In His Wheelchair 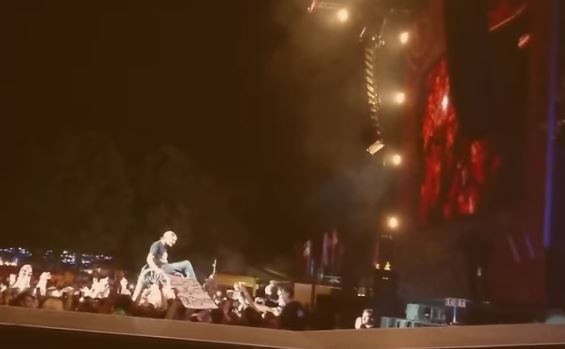 The Foos were the closing act of the Sziget Festival concert in Budapest on Tuesday, August 14th.

During the show, Dave Grohl called out to the crowd and invited a fan in a wheelchair up on stage to join them. The happened while they were in the middle of the last song. According to Hungary Today via Spin, Grohl said to the crowd:

The man was then crowd surfed, up to the stage still in his wheelchair. Another guest, this time a girl who was blowing bubbles throughout the concert was also asked to join the band and blow bubbles beside the drummer Taylor Hawkins.

As the man arrived to the stage, Grohl went over and embraced him, then indicated for him to watch the show from the side of the stage, as the band continued playing broke into the song “Everlong.”

At the end, Grohl gave the man in the wheelchair another hug, this time inviting him to smash the frontman’s guitar on stage. Grohl continued to interact with the man at different stages during the rest of the show. During those interactions, the fan could be seen on the massive video screen projected throughout the concert. Check it out below!

Hope For Music Fans As Billy Joel To Tour In 2021