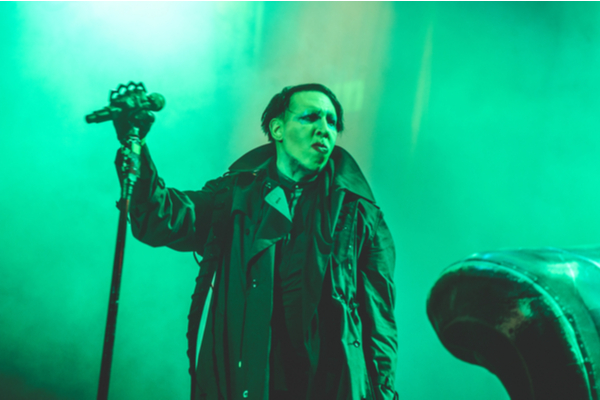 Former assistant to accused, Marilyn Manson is suing the shock-rocker for sexual assault, battery, and harassment from their time working together. Ashley Walters has brought the second lawsuit against the musician in as many months, following Esme Bianco’s lawsuit in late April. The Game of Thrones actress alleged sexual assault, physical abuse, and human trafficking against the Putting Holes In Happiness singer.

According to a report by The Cut, the complaint was filed on May 18th, in the Superior Court of Los Angeles County. In 2010, the 26-year-old aspiring photographer first had contact from Manson through MySpace, where Manson proposed working together. Walters received an invitation to Manson’s West Hollywood home to continue discussions.

The lawsuit alleges that a photoshoot was conducted between the pair, after which Manson allegedly pinned Walters on his bed. Manson allegedly attempted to kiss Walters, to which she turned away from, before biting her ear and placing her hand in his underwear. According to the report, Walters moved away from Manson and soon left his home after the events.

Though Walters left that first meeting with Manson “feeling confusion and fear”, the lawsuit says she “also felt excitement about their creative connection and similar artistic interests”, and “made the decision to… ignore the traumatizing experience of being pinned to his bed”.

More incidents were alleged to have taken place at future photoshoots, including a one with an unnamed actor Manson had hired. Walters’ statement alleges the actor “threw her against the wall and roughly shoved his tongue into her mouth”.

During this collaboration period, the lawsuit alleges that Walters received messages from Manson, praising her and their work, and was “overly effusive in praising Walters”. The lawsuit claims, “His expert manipulation was both calculated and effective. Walters pushed away thoughts about the abuse she endured while in [Manson’s] physical presence.”

In 2010, Walters accepted Manson’s offer to be his personal assistant, but allegedly faced a litany of incidents amid an “atmosphere that was isolating”. The lawsuit claims Walters was forced to stay up for 48 hours straight on multiple occasions. Manson allegedly broke into angry outbursts, breaking furniture and household items that he would purportedly berate her for not cleaning up fast enough.

The lawsuit also alleges that Manson “commonly offered Walters up to influential industry friends and associates”. In one such alleged incident at the 2010 Spike TV Scream Awards in Los Angeles, Manson pushed Walters onto the lap of an unnamed actor. After Manson allegedly said that the actor could “have her”, the actor then kissed Walters and “kept” her on his lap.

The lawsuit also recounts a similar incident where Walters was “offered up” to “an industry friend and director”. Walters was allegedly groped by this unnamed director through the night. After being hired to perform for a “wealthy musician” in 2011, Manson allegedly instructed Walters to get intimate with the musician. The unnamed musician groped her and “engaged in inappropriate behaviour”, allegedly from the encouragement of Marilyn Manson.

Manson has also been accused of smearing Walters’ reputation in mid-2011 and is said to have “physically and verbally threatened her”. Manson’s former fiancée Evan Rachel Wood was one of a few women who publicly brought allegations of abuse against the musician in February. Wood had previously testified about alleged abuse in 2018 without naming Manson as the perpetrator.

Manson denied the allegations brought against him by several different people, calling the claims “horrible distortions of reality”. Following being dropped by his record label,  Manson wrote on Instagram that his “intimate relationships have always been entirely consensual with like-minded partners. Regardless of how – and why – others are now choosing to misrepresent the past, that is the truth.”

Manson also denied through his lawyer allegations made by Esme Bianco in the lawsuit she filed in April. “These claims are provably false,” read a statement by Manson’s lawyer Howard E. King.

“To be clear, this suit was only filed after my client refused to be shaken down by Ms. Bianco and her lawyer and give in to their outrageous financial demands based on conduct that simply never occurred. We will vigorously contest these allegations in court and are confident that we will prevail.”

When contacted by reports for comment on Walters’ lawsuit, a member of Manson’s team “vehemently denied any accusations of assault”.