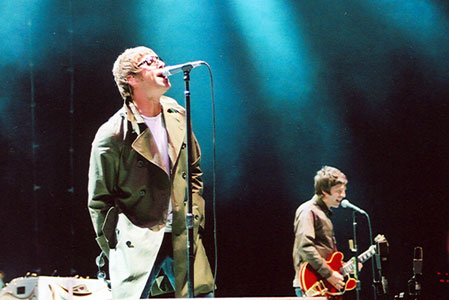 The BBC is set to air the ‘Oasis In Their Own Words’ documentary ahead of the release of  ‘Supersonic’ in October.

The documentary will be available on BBC iPlayer from the 30th of September. According to a press release, ‘Oasis In Their Own Words’ “charts the band’s meteoric rise” and  features footage and interviews from throughout the band’s career.

Meanwhile, ‘Supersonic’ director, Mat Whitecross has said that his documentary shows what the Gallagher’s are really like  “For whatever reason because of all the tabloid bullshit and because of the caricature of them that was made through the years people have forgotten what they’re really like and that was one of the things we really wanted to set the balance right and just go look they’re smart, passionate fucking funny people who deserve to be right up front alongside The Rolling Stones, The Beatles all these people.”

The director continues “The caricature that persists is that Noel is the cold, calculating talented one and Liam is the chaotic one but I think there’s so much more to them than that. I think there’s a lot introspection in Liam. He’s incredibly perceptive about his own character and his weaknesses. He’s got an amazing psychedelic mind and I think if you get in there some of the stuff he says is like poetry. You have to write everything down. It’s fucking brilliant.”

‘Supersonic’ will be released on the 2nd of October.