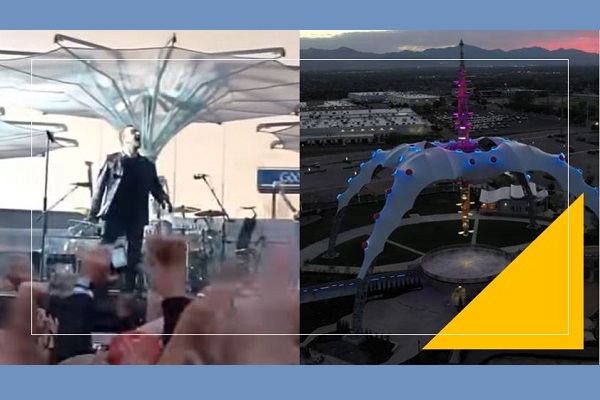 The massive, claw-shaped stage from the U2 360° Tour found a permanent home in the Utah desert after an audience became inspired. The huge structure had been transformed into a permanent art installation at the aquarium in Salt Lake City in 2019, going on to become a community gathering space.

Founder and CEO of the Salt Lake City’s Loveland Living Planet Aquarium, Brent Anderson had overseen the huge structure’s erection in 2019. Speaking in 2021, Anderson revealed, “the first time that I saw it was at a concert in Spain. It was really a fascinating experience that a structure could have such an interplay with 100,000 people.”

Performing their album, No Line on the Horizon, U2 rocked that stage at 44 stadiums in seven different tour legs between June 2009 and July 2011. According to reports, crews arrived at each venue three days in advance to set everything up for the huge set-up. The worldwide trek is said to have brought in $736 million, while attracting 7.2 million ticket holders across two years.

The 165-foot tall, 190-ton steel frame has been homed at Salt Lake City aquarium since 2019, becoming a gathering spot for film screenings and farmer’s markets. U2 fans have also flocked to the massive structure in regular pilgrimages, to catch a glimpse of the band’s history.

From starting out as the biggest concert stage ever built, U2’s recycled ‘Claw’ has since become the largest repurposed stage structure. 30 truckloads had been used in a bid to transport huge pieces to Utah, with the process taking about a year to complete. Aquarium COO, Heather Doggett said, “When the lights are on and you’re underneath it, it’s just magical.”

The recycling of a 16-story U2 venue is reported to have prevented 760,000 pounds of CO2 from entering the atmosphere, equating 35,500 gallons of gasoline emission. Now named the Ecosystem Exploration Craft & Observatory, the structure is claimed to be a key component in the aquarium’s sustainability efforts.

Doggett said there is a “permanent plan for a virtual reality experience underneath EECO that can take you on an adventure to learn about science.” While Anderson added that the former U2 stage is almost like an art piece that is “never going to be finished. There’s always one more thing to do on it. But that’s also part of the excitement, is that it doesn’t have to be done and over. It can always be growing and changing.”

The Strokes Hyde Park Gig “Might Be Our Last” Says Albert...