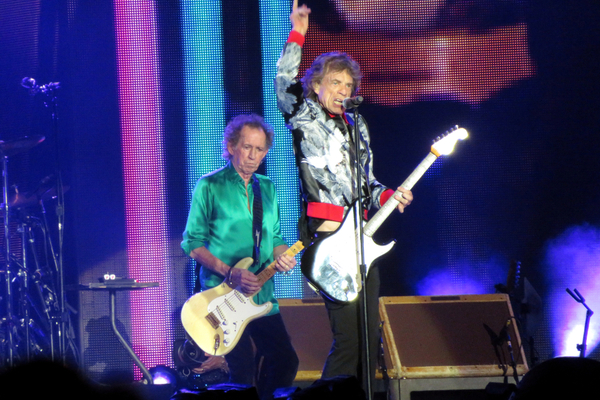 Mick Jagger has responded to Paul McCartney’s “blues cover band” jibe about the Rolling Stones during a live show.

Earlier this month, Paul McCartney aimed this sly dig at Mick Jagger and co. “(The Beatles’) net was cast a bit wider than [the Stones’]. I’m not sure I should say it, but they’re a blues cover band, that’s sort of what the Stones are”, McCartney told the New Yorker.

The music icon made similar comments about the Rolling Stones last year.

Speaking to Howard Stern on Sirius XM, McCartney said, “They are rooted in the blues. When they are writing stuff, it has to do with the blues. We had a little more influences. … There’s a lot of differences, and I love the Stones, but I’m with you. The Beatles were better”.

Mick Jagger also responed to those comments at the time, joking that “there’s obviously no competition”.

He also added, “One band is unbelievably luckily still playing in stadiums, and then the other band doesn’t exist”.

“Join us in a blues cover band later”

During a concert in LA last Thursday (October 14) for the No Filter Tour, Mick Jagger issued a sarcastic response to McCartney’s comments.

Earlier this month, Mick Jagger also responded to other calls for the Rolling Stones to retire, following the death of drummer Charlie Watts.

Mick Jagger revealed that some of the comments aimed at the band included that they, “should have done the tour and stopped”.

Jagger also added, “Some people said, ‘Oh, Charlie died, and you should have not done the tour — and stopped. And other people would think, ‘The thing about the Rolling Stones throughout their career has been their resilience in the face of adversity.’ And we’ve had ups and downs, mostly ups, to be honest — but we’ve had adversity,” Mick explains. “And this was probably one of the most difficult ones”.

On top of this, Mick Jagger and Keith Richards explained why the Rolling Stones have shelved their track “Brown Sugar”. More on this here.

Dave Davies Feeling Optimistic Over Kinks Reunion In Near Future