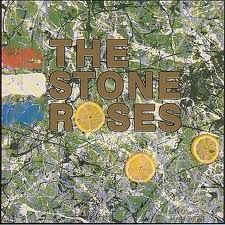 The Stone Roses is the debut album by English rock band The Stone Roses, released in 1989. It cemented the band’s reputation among critics, and is still rated by some as one of the most influential albums ever recorded.In 2004 an Observer Music Monthly poll consisting of musicians and critics voted the album the greatest of all time, as did the writers of NME in 2006, declaring it to be the greatest British album of all time. The Roses recorded the album with John Leckie, a notable producer who had worked with Pink Floyd on Meddle. It was released by Silvertone, a division of Zomba Records created to work with “new rock” acts.

As with most Stone Roses releases, the cover displays a work by John Squire. It is a Jackson Pollock-influenced piece titled “Bye Bye Badman,” which makes reference to the May 1968 riots in Paris. The cover was named by Q magazine as one of “The 100 Best Covers of All Time.” In the accompanying article, Squire said: “Ian [Brown] had met this French man when he was hitching around Europe, this bloke had been in the riots, and he told Ian how lemons had been used as an antidote to tear gas. Then there was the documentary—-a great shot at the start of a guy throwing stones at the police. I really liked his attitude.” This story was also the inspiration for the lyrics to the song of the same name.  The background of the piece is based on the Giant’s Causeway in Northern Ireland. The band visited the causeway while playing a gig at the University of Ulster in Coleraine.

In 1997, it was named the 2nd greatest album of all time in a “Music of the Millennium” poll conducted by HMV, Channel 4, The Guardian and Classic FM. In 1998, Q magazine readers placed it at number 4, while in 2000 the same magazine placed it at number 29 in its list of the “100 Greatest British Albums Ever.”In 2004, the album was voted the best British album of all time in The Observer‘s poll of 100 musicians and critics.In 2006, Q magazine placed the album at #5 in its list of “40 Best Albums of the ’80s”.In 2008, it was named the 5th “greatest British album ever” by a Q magazine/HMV poll. In 2000, it received the “greatest album ever” award at the NME Premier Awards show, and in 2006, the album topped the magazine’s “100 Greatest British Albums Ever” list.In summer 2009, NME released a special issue about the album’s 20th anniversary, labelling it as “the greatest debut album ever.”

In 2005, Spin magazine ranked it 78 on its list of the “100 greatest albums of the past twenty years.”In the same year, when revising the “500 Greatest Albums” for book format, Rolling Stone included it as one of the eight new entries placing it at #497 and in a 2012 revised list, the album placed at #498. In 2006, Time named it one of “The All-TIME 100 Albums.” In 2003, Pitchfork Media named it the 39th best album of the 1980s. In 2012, Slant Magazine listed the album at #28 on its list of “Best Albums of the 1980s”. In 2006, British Hit Singles & Albums and NME organised a poll of which, 40,000 people worldwide voted for the 100 best albums ever and The Stone Roses was placed at #7 on the list. In 2010, The Stone Roses won the Mojo Classic Album award. Upon announcing the award, Mojo noted how the band ‘managed to sum up an era and to create a piece of work that also transcends the time in which it was made’, before asking ‘Is there a more iconic British album of the last two decades?

All songs written and composed by Ian Brown and John Squire.